Electromagnetic waves are transverse waves that transfer energy  from the source of the waves to an absorber.

The waves that form the electromagnetic spectrum are grouped in  terms of their wavelength and their frequency. Going from long to  short wavelength (or from low to high frequency) the groups are:  radio, microwave, infrared, visible light (red to violet), ultraviolet,  X-rays and gamma rays.

The highest frequency waves (gamma) have the highest energy and shortest wavelength.

Question: Explain why it is important that the Earth’s atmosphere absorbs gamma rays emitted by the Sun.

Different substances may absorb, transmit, refract or reflect  electromagnetic waves in ways that vary with wavelength.

Refraction is due to the  difference in velocity of the waves in different substances. Visible light is refracted and reflected at a boundary with glass

Wave front diagrams can be used to  explain refraction in terms of the change of speed that happens  when a wave travels from one medium to a different medium. Not all of the wave enters the new medium at the same time, so the first part that enter will slow down more than the part not in the medium. His causes the wave to change direction.

Question: Wave front diagrams are used to explain why light refracts when it passes from air into glass.
Figure 1 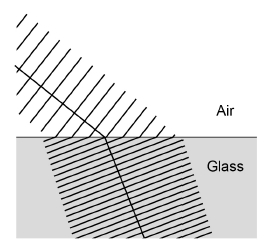 (a)  Explain why the light refracts as it passes from air into glass. (3 marks)

A perfect black body is an object that absorbs all of the radiation incident on it.

A black body does not reflect or transmit any radiation. Since a good absorber is also a good emitter, a perfect black body would be the best possible emitter.

The temperature of a body is related to the balance between incoming radiation absorbed and radiation emitted.

0.0 (because A perfect black body is an object that absorbs all of the radiation incident on it. )

Pages: 1 2 3
We use cookies on our website to give you the most relevant experience by remembering your preferences and repeat visits. By clicking “Accept All”, you consent to the use of ALL the cookies. However, you may visit "Cookie Settings" to provide a controlled consent.
Cookie SettingsAccept All
Manage consent