Speed does not involve direction. Speed is a scalar quantity.

The speed of a moving object is rarely constant. When people walk, run or travel in a car their speed is constantly changing.

The speed at which a person can walk, run or cycle depends on many factors including: age, terrain, fitness and distance travelled.

Typical values may be taken as:

A typical value for the speed of sound in air is 330 m/s.

For an object moving at constant speed the distance travelled in a specific time can be calculated using the equation:

Question: Calculate the speed of an object that moves 4m in 3s

The thinking distance is 7.8 m

The velocity of an object is its speed in a given direction. Velocity is a vector quantity.

Acceleration is a change in speed and/or direction.

If an object moves along a straight line, the distance travelled can be represented by a distance–time graph.

The speed of an object can be calculated from the gradient of its distance–time graph.

If an object is accelerating, its speed at any particular time can be determined by drawing a tangent and measuring the gradient of the distance–time graph at that time.

Question: The graph below shows a distance-time graph for 50 seconds of a bicycle ride. 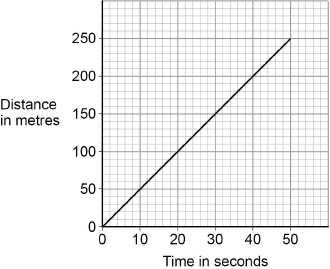 The speed is the gradient of the line

Question: The graph shows a distance-time graph for an athlete in a race.

Describe how you can use the graph to determine the velocity of the athlete 20 minutes after the start of the race.

measure the gradient of the tangent

The average acceleration of an object can be calculated using the equation:

An object that slows down is decelerating.

Question: In a race, the athlete had a constant acceleration during the first 3.2 seconds. His velocity increased from 0 m/s to 11.6 m/s
Calculate the acceleration of the athlete.

Question: A lorry travels 84 m with a constant acceleration of 2.0 m/s2 to reach a velocity of 19 m/s
Calculate the initial velocity of the lorry.

The initial velocity is 5 m/s

The acceleration of an object can be calculated from the gradient of a velocity–time graph.

The distance travelled by an object (or displacement of an object) can be calculated from the area under a velocity–time graph.

The distance travelled by an object (or displacement of an object) can be calculated from the area under a velocity–time graph.

If the graph is not a straight line, you can count the squares to find the area

Question: The graph shows how the velocity of a car changes with time. 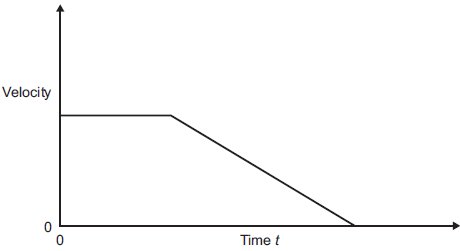 Which feature of the graph represents the negative acceleration of the car?

The gradient of the line

Question: The graphs show how the velocity of two cars, A and B, change from the moment the car drivers see an obstacle blocking the road. 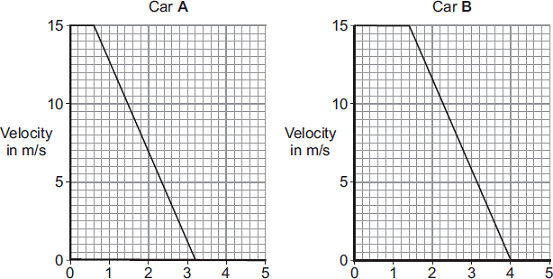 Time in secondsTime in seconds
One of the car drivers has been drinking alcohol. The other driver is wide awake and alert.
Use the graphs to calculate how much further car B travels before stopping compared to car A.

Distance travelled by car A:

Distance travelled by car B:

Near the Earth’s surface any object falling freely under gravity has an acceleration of about 9.8 m/s2

An object falling through a fluid initially accelerates due to the force of gravity.

As the falling object increases speed, the air resistance on it increases

When the air resistance = the weight, the forces acting on the object are balanced: there is no resultant force.

Eventually the resultant force will be zero and the object will move at its terminal velocity.

Question: The graph shows how the vertical velocity of a parachutist changes from the moment the parachutist jumps from the aircraft until landing on the ground. 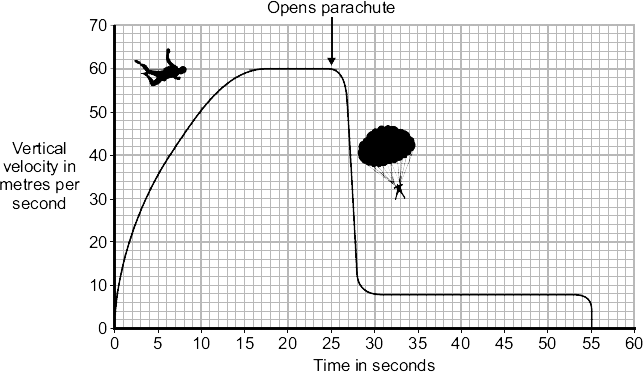 Previous Topic
Home
Next Topic
We use cookies on our website to give you the most relevant experience by remembering your preferences and repeat visits. By clicking “Accept All”, you consent to the use of ALL the cookies. However, you may visit "Cookie Settings" to provide a controlled consent.
Cookie SettingsAccept All
Manage consent