A force or a system of forces may cause an object to rotate.

The turning effect of a force is called the moment of the force. The size of the moment is defined by the equation:

moment of a force = force × distance

Question: State what is meant by the moment of a force.

The turning effect of a force

Question: Figure 1 shows how a lever can be used to lift a heavy rock. 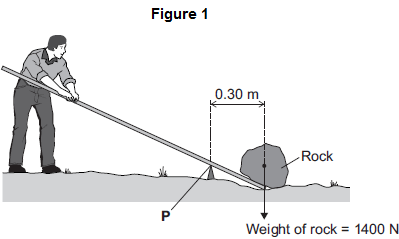 Calculate the moment of the weight of the rock about point P.

moment of a force = force × distance

The moment of the rock is 420 Newtons

A simple lever and a simple gear system can both be used to transmit the rotational effects of forces.

Question: Figure 2 shows a person sitting at the right end of the see-saw, 2.0m from the pivot. Her weight is 300 N.
Figure 2

The see-saw is balanced.
Calculate the weight of the person who is 1.5m from the pivot

The mass of the second person is 400 Newtons

A fluid can be either a liquid or a gas.

The pressure in fluids causes a force normal (at right angles) to any surface. Pressure is measured in Pascals, Pa.

The pressure at the surface of a fluid can be calculated using the equation:

The pressure is 3000 Pascals

The pressure due to a column of liquid can be calculated using the equation:

A tap allows water to be collected from the water butt in a watering can.
If the tap was placed higher up on the water butt, what difference would it make to the rate of flow of water from the tap?
Explain your answer. (2 marks)

rate of flow of water less

because pressure is less

In a liquid, pressure at a point increases:

Calculate the differences in pressure at different depths in a liquid.

A partially (or totally) submerged object experiences a greater pressure on the bottom surface than on the top surface. This creates a resultant force upwards. This force is called the upthrust.

An object will float if the weight of the object is less than the upthrust acting on it.

The number of air molecules (and so the weight of air) above a surface decreases as the height of the surface above ground level increases. So as height increases there is always less air above a surface than there is at a lower height. So atmospheric pressure decreases with an increase in height.

so always less weight of air than below

Previous Topic
Home
Next Topic
Pages: 1 2 3 4 5
We use cookies on our website to give you the most relevant experience by remembering your preferences and repeat visits. By clicking “Accept All”, you consent to the use of ALL the cookies. However, you may visit "Cookie Settings" to provide a controlled consent.
Cookie SettingsAccept All
Manage consent